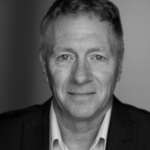 Joining Murder One in 2017, Gary has been performing in murder mystery events playing the part of casting agent Hansen Donner in ‘Murder Three Dimensional‘.

Gary studied his BA (Hons) Performance Art at High Melton/ Hull University and stepped straight into his first, professional, acting role as: (The Sargent): In (The China Vase) at:(The Edinburgh Festival) While at the Fringe also did a short time on Fringe Radio.

During his career he has played many varied roles in theatre, television, open air and street theatre, Shakespearean characters and several characters in Panto!

He has spent the last 18 months playing CPRL Jones (and Chesney Allen of the Flanagan and Allen fame) in ‘Dad’s Army – A Salute to the 40’s’. Gary enjoys the challenge to perform all types of characters including his winter performances in ‘A Christmas Carol ’ as Scrooge.