Murder One in Pakistan – video diary!

Cementing Murder One as an INTERNATIONAL Murder Mystery events company, our actors have just returned from a tour in Pakistan – performing at five star hotels in Lahore and Karachi for some of the most influential and innovative business leaders from many diverse industries within the country.

Following the success of The Goodbye Girl at film festivals world wide, Murder One have now produced their second feature film, Flower Boy – a bullying awareness feature film involving many of our actors and over 250 other cast and crew.

More info about the film, including reviews and an interview with director Aidey Pugh can be found here.

See the trailer below :

Murder One were delighted to stage another of our murder mystery events for Pinewood Studios, who join our list of prestigious clients. Various Pinewood staff and stunt men and women working at the underwater stage on such films as James Bond became sleuths for the night as the venue for their Christmas Party became a crime scene and they tried to solve another of our fiendish murders.

Want to hire Murder One for your own event? Take a look around our site to see how we stage the perfect murder! 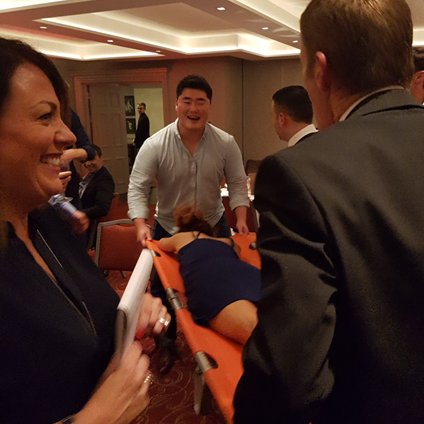 Jupiter plan it well to solve the perfect murder

As part of their October tour, Murder One were proud to perform a murder mystery evening for Jupiter Asset Management – a fund management group, managing equity and bond investments for private and institutional investors. Thirty of Jupiter’s sales people and their internal sales support partners gathered in St Albans at the superb Sopwell House to solve yet another murder most foul!

Murder One were delighted to recently stage another murder mystery event at the iconic Alnwick Castle, the location used on productions such as Harry Potter, Downton Abbey, Transformers 5, and many more! The Castle is the second largest inhabited castle in the country and home to the Duke of Northumberland’s family.

Murder In The Heatwave

FOR ALL INFO ON OUR TEAMBUILDING, CORPORATE AND PUBLIC EVENTS please explore our site!.

Book us for your own teambuilding/corporate murder mystery!