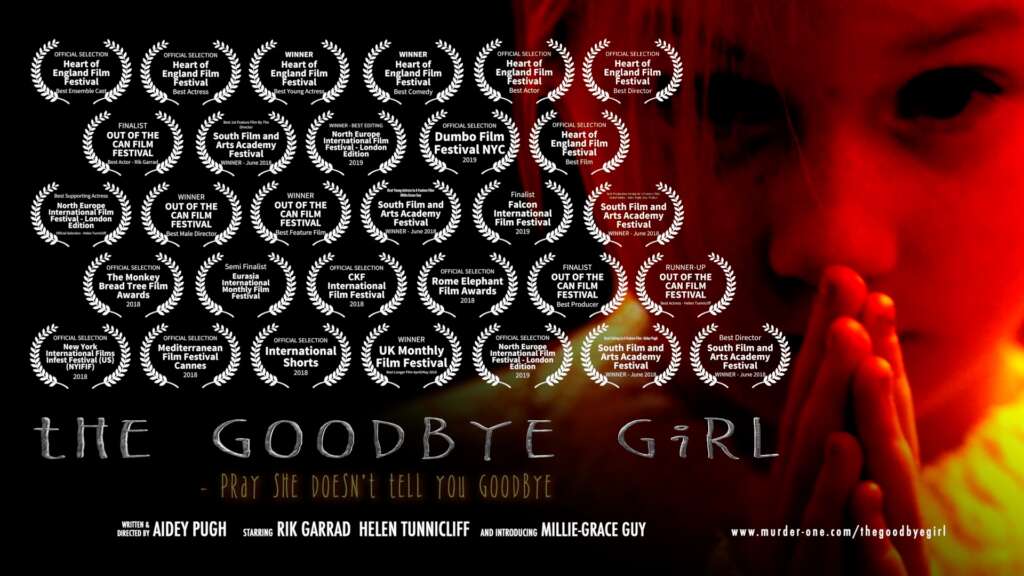 Murder One are delighted to announce that the feature film ‘The Goodbye Girl’ (trailer at bottom of this page) has just won it’s 30th laurel, and another award – this time from the North Europe International Film Festival: London Edition 2019 – part of the Fusion International Film Festival. With a week of screenings the festival culminated in a Red Carpet Awards Ceremony at The Crowne Plaza, London Docklands, Aidey Pugh’s ‘The Goodbye Girl’ picked up an award for Best Editing. Pics from the festival can be viewed here. This follows on from the film being officially selected into the Mediterranean Film Festival Cannes which highlighted a selection of the best films from around the world at Hotel Barriere Le Gray d Albion of Cannes. Trailers for The Goodbye Girl can be viewed below…

The Goodbye Girl has also recently won ‘Best Feature Film’ and ‘Best Male Director’ (Aidey Pugh) at the Out Of The Can Film Festival in Derby! Helen Tunnicliff was also Runner Up for her portrayal of ‘Jacqui’ in the film and in addition Rik Garrad was a finalist for his performance as Gabriel, with Aidey Pugh a finalist for Best Producer. We were all delighted and honoured to win those categories and to be included amongst other amazing talent at this International Film Festival which had over 2000 entries from over 35 countries.

‘The Goodbye Girl’ is the first feature film by Murder One director Aidey Pugh.  It is the follow up to his short ‘Empty Spaces’, the latter being screened at film festivals in the USA, including as a finalist in a Miami Film Festival in March 2018. It was two and a half years in the making and – with no crowd-funding or handouts – was made for a budget of just £900, which went on film kit for the crew, and sweets for the kids in the film!

The hard-working, dedicated cast and crew kindly gave their time, skills and expertise for free and meticulous production values ensured that it’s low budget in no way detracts from the impact of this film. The English identity of the film is spiced with a hint of the cosmopolitan in that musicians and bands from Switzerland, Berlin, Miami, Orange County, Los Angeles, Cape Coral, San Diego and also Tel Aviv all generously allowed their music to be used, lending an international flavour to a film set in an unashamedly gritty town in the North of England. Inspired by the works of writer Jimmy McGovern (‘Cracker’; ‘The Street’) both ‘Empty Spaces’ and ‘The Goodbye Girl’ are gritty dramas revolving around the grim and tragic lives of Aidey’s characters who inhabit the typical terraced/back to back housing in this non-specified Northern town. With a nod to Jimmy McGovern’s ‘The Street’ there are several cross over characters in Aidey’s two films as their lives are explored.

The tagline of “The Goodbye Girl” offers a clue to the sinister nature of the film’s central character: “Pray she doesn’t tell you Goodbye” – as well as to the chillingly convincing performance of young Mille-Grace Guy, the eponymous six-year old Goodbye Girl herself, who amazed all involved in the production with her presence on camera and her ability to carry off such a demanding role with actors Rik Garrad (‘The Syndicate’, ‘In The Flesh’, ‘Hollyoakes’, ‘Coronation Street’) and Helen Tunnicliff (‘Home Grown’, ‘Bait’) receiving critical acclaim as her feuding parents.
In the film Lydia – a somewhat neglected, mysterious and troubled six year old girl – seems to predict (or cause?) a series of deaths in her prayers… Is it just coincidence… or is something more sinister at work… And as the body count rises how will a family member react when they hear the little girl forecast their own death?… Just pray she doesn’t tell you goodbye!

The film premiered to cast and crew on 25-03-18 and is now going from strength to strength worldwide, having been officially selected for Film Festivals in Rome, Moscow and the UK as well as semi-finalist and category winner in UK film festivals.

The Goodbye Girl also recently won ‘Best Feature Film made for under $5000 at the Monkey Bread Tree Film Awards. The festival director said of the film:
“The most impressive factor of The Goodbye Girl is really the sheer size of its cast and locale mounting. For a film produced on such a tight budget its hard to imagine such a realistic looking, as well as large scale, depicting almost an entire world with which the film takes place within.

Though the plot, and often some of the characters, leave a nasty taste in the viewers mouth, and there is of course the odd runtime – 53 minutes, which seems not much like a feature film at times… one can’t help but consider these flaws little, as in a certain context this film would have made for a great TV special, such as Ken Loach’s earlier work, in particular his contributions to The Wednesday Play – such as ‘Cathy Come Home’. However, I should add – The Goodbye Girl isn’t a socialist film really, as it slips in and out of its tonal moments, making it more of an entertaining film than say a sophisticated political one which aims to rouse a parliamentary debate.

All in all a well armed film, one which definitely highlights its teams abilities, and one which will pave the way to more lengthy and satisfying future works.”

And indeed some of the (surviving!) cast will return in Aidey Pugh’s next feature film – ‘Flower Boy‘ – currently in production…

Many production stills can be found in various galleries here.

There are 37 comments. Add yours.